Welsh Rarebit or ‘Caws Pobiis’ which means baked cheese in Welsh, is more than just posh cheese on toast. It is the perfect comfort food, consisting of a thick, rich cheese sauce, grilled on top of chunky farmhouse bread, and topped with chives.

With the addition of a good Welsh stout, mustard and Worchester sauce, this Welsh Rarebit recipe is super easy and quick to make and gives cheese on toast a kick into the next generation.

Okay, before we delve into the recipe, let’s address the first question I’m always asked about Welsh Rarebit, is it just cheese on toast? Absolutely not!

Cheese on toast is made from lightly buttered toast topped with grated or sliced cheese whereas Welsh Rarebit uses a Bechamel sauce made from flour and butter which is much richer and creamier. The sauce may also include paprika, Worcester sauce, and sometimes even ale for flavour.

What To Serve With Welsh Rarebit:

Welsh Rarebit makes a great snack on its own, but if you want to make it into a light meal, you can serve it with bacon or a side salad.

How long does Welsh Rarebit last?

Welsh Rarebit will last in the fridge for up to ten days. Keep it in a sealed container for freshness.

No, Rarebit is not vegetarian as it contains Worchester Sauce which is not suitable for vegetarians.

Traditionally Welsh Rarebit does not contain eggs, however, there are some variations that do include them.

Can You Freeze Welsh Rarebit?

No, it is not a good idea to freeze your Rarebit as it largely affects the quality and can split upon defrosting.

Welsh Rarebit is not particularly healthy as it is full of eggs, dairy and carbs however it is by far fewer calories than a full breakfast which is around 800 Calories.

How Many Calories Are in Welsh Rarebit?

There are around 680 Calories in a serving of Welsh Rarebit. 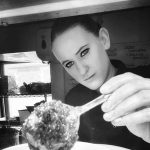 Natalya is a Welsh chef from the small town of Tenby on the south coast of Wales. With 17 years of experience as a professional chef, Natalya is passionate about Welsh cuisine and loves to use local produce in her dishes. As well as running her family-run business, Lemon & Lime Kitchen, she, and her wife sell their small online bakery produce on Etsy!