Caerphilly Castle is the second largest castle in Britain and one of the mightiest medieval fortresses in Western Europe. Visit South Wales to enjoy this wonderfully preserved historical architecture in a complex concentric design. Gain an insight into the volatile period in which it was built and discover its origins, leaning tower, and a resident ghost.

How Old is Caerphilly Castle?

How Was Caerphilly Castle Built?

The castle’s construction was ordered by Henry III and was originally built in very hostile territory during the second half of the 13th century. Caerphilly Castle was constructed by Gilbert de Clare (Earl of Gloucester and Hertford) and also referred to as ‘Red Gilbert’ as part of his struggle to keep control of Glamorgan.

The castle walls are made of Pennant sandstone, and it is built on a natural gravel bank in the local river basin2 (source: Caerphilly Castle – Wikipedia.).

Traditional 13th-century building procedures involved quarrymen ‘reading’ the rock face to see where it will fracture to separate stones for the walls. They would then drill a series of holes in the stone and pound corners into the holes, causing shock waves to travel through the stone and break it.

The stones were transported from the quarry to the construction site by horse-drawn wagons. The rough stone was then chiselled into blocks by stone masons. The final stones were lifted to the scaffolding on the castle walls with a man-powered crane whilst other workers mixed lime, earth, and water to build mortar. Mortar was then applied to the stone blocks to keep them in place3 (source: How Stuff Works).

What Type of Castle is Caerphilly Castle?

Caerphilly Castle is an impressive example of a concentric castle design with its double ring of defence walls, each adorned with round towers, square towers, and four fortified gateways. It was one of the first concentric castles in the United Kingdom.

Gilbert’s experience at the siege of Kenilworth Castle in 1266 CE is believed to have influenced the castle’s design.

Gilbert’s wonderful architectural creation would likely have cost more to build than other significant castles built in Wales during the 13th century CE, due to its size and complicated water defences4 (source: Wikipedia).

Caerphilly Castle is the largest castle in Wales. It occupies roughly 30 acres and is surrounded by two vast artificial lakes. The central island is reached through a drawbridge and a pair of gatehouses.

Gilbert de Clare inherited the land when he was 18 years old and began construction on the castle as a method of defence and to subdue the Glamorgan region. Most of the castle was built in only three years (between 1268 and 1271).

The castle saw a lot of fighting between Gilbert, his descendants, and the native Welsh rulers. In 1270, Llywelyn ap Gruffudd, who was Prince of Gwynedd at the time, attacked the castle before construction had been completed, burning much of it to the ground.

Despite this, Gilbert de Clare continued building the Castle at a very fast pace, completing it by 1271. Additional water defences, towers and gatehouses were also built with the aim of increasing security and protecting lowlands from flooding5 (source: D.F. Renn, Caerphilly Castle, 1997, P.16).

However, by the fourteenth century, the castle had fallen into disrepair and in the early 16th century, Caerphilly Castle had become a ruin.

In the mid-seventeenth century a large bastion or redoubt was built to guard the castle’s north-western side and centuries later (between 1928 and 1939) a restoration and reconstruction campaign took place and its lakes (which had dried up) were reflooded.

Since 2016, The Welsh Government’s Historic Environment Service (CADW) have cared for the castle.

Here is a timeline of Caerphilly Castle’s history:

Who Lived in Caerphilly Castle?

A mediaeval castle such as Caerphilly Castle would have also been inhabited by officers and servants. This includes everyone from the knights and squires to the maids and stable boys6 (source: World History Encyclopedia).

The Seneschal (or steward) would be in charge of overseeing the day-to-day running of the house and all the staff.

What was Caerphilly Castle used for?

As well as being home to noble families and their officers and servants, the castle had a significant role in the life of Caerphilly folk.

One of my favourite facts about Caerphilly Castle is that the locals have always found interesting uses for the structure. It served as a local jail in the 15th century and was used not just for the town’s eisteddfodau and religious rallies in the nineteenth century, but also for festivals, concerts, military tattoos, and horticulture displays.

Through the Inner West Gatehouse, you will find the Middle Ward, which surrounds the Inner Ward as a second line of defense. Soldiers would have been able to fire their arrows across the south lake through the many arrow loops and crenellations (castle battlements).

The walls of the middle ward would have been much higher in the mediaeval period than they are now, forming a more substantial defense.

The distance between the castle’s outside wall and the centre is too great for conventional warfare to be effective. Catapults couldn’t reach it, and tunnelling was too difficult. Caerphilly’s water fortifications, which are regarded as the most advanced of their sort in Britain, provided protection against mining, which might otherwise weakened castle walls throughout the period7 (source: Wikipedia).

On the South Dam Platform, to the left of the outer castle, wooden replicas of medieval 12th Century siege engines are present to give visitors an idea of the defence technology used.

The replicas include a mangonel, ballista, perrier, and a trebuchet. They used tension, torsion, and counterpoise in the same way that a bow does. These engines were used in the Middle Ages to break down walls and crush structures, as well as to defend against anyone who came too close to their walls.

The weapons are fired at Easter to demonstrate their power to visitors.

What is Caerphilly Castle Famous for?

Caerphilly Castle is also famed for its impenetrable water fortifications (moats and lakes), and a multitude of gatehouses:

It is not only Italy that has a famous leaning tower, Wales also has one! It leans approximately 10 degrees, that’s more than twice as much as the leaning tower of Pisa! The South-East tower looks as if it is about to collapse at any second with several lumps of it already fallen.

The reason that the south-east tower leans is likely due to ground subsidence rather than battle damage. We know this because the rest of the tower’s outer face remains intact. A brave and very tall (6 metre) statue of the 4th Marquis of Bute supports the tower, who from 1928 to 1939 carried out restoration work on the castle.

The tower was believed to house Gilbert’s senior staff, such as the steward and carver.

1. The Ghost of the Green Lady

Many believe that the castle is haunted with witches and goblins among those that roam the corridors. But, the most famous spiritual resident at Caerphilly Castle is the Green Lady8 (source: W. Sikes, Rambles and Studies in Old South Wales, P.41, 1881). But who is she?

Gilbert married Princess Alice of Angouleme (in southwest France). Alice was the niece of Henry II who was believed to be a cultured lady with a strong personality. She grew to despise her husband’s combative demeanour and unfortunately fell in love with the dashing Welsh Prince of Brithdir.

Gilbert found out about the princess’s forbidden love and she was sent back to France. The Prince was soon swinging from a noose at Gilbert’s command and the vengeful husband dispatched a courier to France to inform Alice of the killing of her lover. She is said to have dropped dead on the spot due to the shock of the news and a broken heart.

Alice’s restless ghost has since haunted the ramparts of Caerphilly Castle. She can be seen dressed in a finely woven green dress, to symbolise Gilbert’s envy. Locals say that on moonlit nights she appears on the walls.

Dewi, the Welsh Dragon, is said to have broken the banks of Caerphilly Castle on the 1st of March 2016 (St. David’s Day) and met with Dwynwen (the Caernarfon Dragon) the following year at Caernarfon Castle, where they fell ‘cwtched’ (Welsh for cuddled) and fell in love9 (source: CADW).

You can visit Dewi, Dwynwen, and their baby dragons at their lair in Caerphilly Castle (near the leaning tower). You may also see their smoke, hear their snores, and hear their tale10 (source: Wales Online).

Cadw (which means preserving in Welsh) own the castle today. Cadw is the Welsh Government’s historic environment service that serve as custodians, caring for monuments conservation and maintenance. You can join Cadw from 2 per and gain access to over 100 of their historical attractions.

If you are a history lover, then visit Caerphilly Castle, an impressive medieval fortress with a gift shop and cafe in Caerphilly town centre. You can wander the extensive interior and discover various exhibitions and artwork.

Here is some additional information: 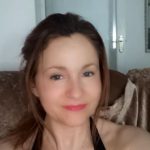 Eve Louise Davies is a Welsh writer and children's book author. During her previous career as a primary school teacher, she discovered her passion for history. Eve loves to visit local places of historical interest and share her experiences.